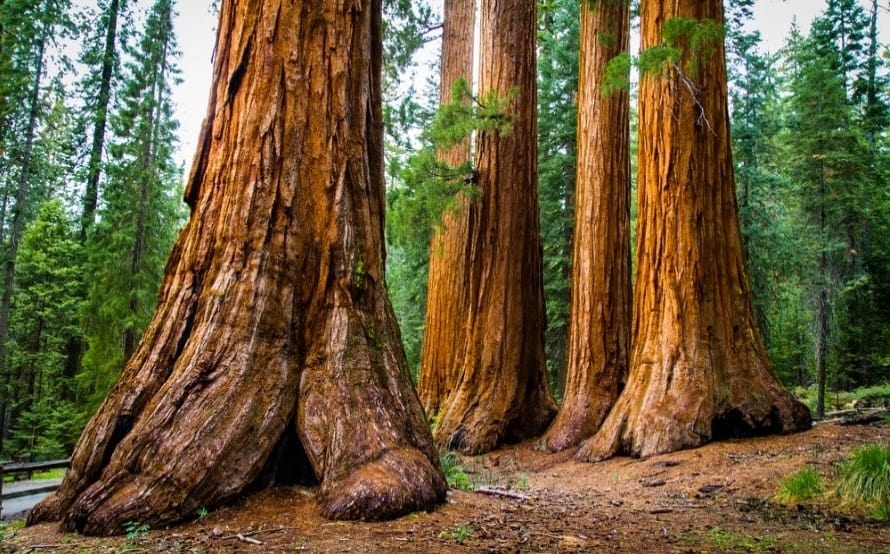 You should take these factors into consideration before you visit. For example, many roads are usually closed during winter due to snowfall, while in summer, there is heavy traffic as many people are visiting.

All four seasons are experienced at Sequoia National Park. There are sunny summers and snowy and cold winters. The average temperature in the park varies depending on the elevation throughout the park.

Due to its low elevation, the Foothills region has hot, dry summers and mild winters. The Sequoia groves are highly elevated and have plenty of snowy winters with mild summers.

This article will guide you on what you should expect when visiting Sequoia National Park depending on the season. Activities, what’s open, crowds, and weather are also included in the guide.

Sequoia National Park weather showcases mild days and cold nights during the spring. Spring is the rainiest season in Sequoia National Park, especially around March and April. In higher elevated areas such as the Sequoia groves, it is normal to experience snow through May.

Be prepared for winter-like conditions if you visit the park in the spring. You may experience snowfall on some park roads.

An average of 2,000 people visit Sequoia each day during the spring, with that number usually increasing to 4,000 visitors per day by May. Tourists can observe wildlife and wildflowers in the foothills by late spring.

If you are comfortable with cold and snowy weather and want to avoid crowds, spring is the best time to go to Sequoia National Park.

The park has a simple camp cabin with wood flooring, heating, and two double beds. There is also a picnic table, a shared central bathhouse, and an outdoor wood-burning stove.

March is the coldest month in Sequoia National Park during the spring. Cold temperatures are typically experienced in higher elevations, while lower elevations have cool nights.

Generals Highway (South of Lodgepole) is usually open all year, while the section from Lodgepole to Grant Grove is open till the 3rd Friday in March.

However, this section is typically subject to closures due to snow. The roads leading to Cedar Grove (In Kings Canyon) and Mineral King are usually closed in March.

Snowfall decreases in April compared to March—and rainy days are fewer. The  Grant Grove road to Cedar Grove is usually open on the last weekend of April.

The Mineral King road stays closed in April. You will likely encounter snowy driving conditions if you plan to visit during that time.

Visiting Sequoia National Park In May

Spring is usually in full swing in the Foothills region by May. The temperatures are typically in the higher 70s with lush green grasses and blooming wildflowers.

However, in the elevated areas of Sequoia Groves, snowstorms can still be experienced in May with freezing overnight temperatures.

The Generals Highway is usually open throughout May, while Mineral King Road is generally opened a week before Memorial Day. Crystal Cave tours start in mid-May.

It is usually scorchingly hot in the Foothills during the summer, while the Sequoia groves are generally comfortable. It also occasionally rains around this time.

All campgrounds and park roads are open during the summer.

If you are looking to go backpacking and traverse Sequoia’s wilderness, summer is the ideal time for such a trip. However, the number of permits issued in a day is limited. You can find out more about the wilderness permits in Sequoia National Park here.

The perfect time to visit the higher elevated Sequoia Groves is summer. You can visit the Giant Forest Museum during this time. However, the lower elevated regions experience 90-degree weather, rendering visits almost unbearable.

The park is usually warm and accessible in June, although it is still possible to experience snow at high elevations. The temperatures in June are ideal for hiking, and all roads are usually open. Rain is rare in June compared to the spring months.

Hiking in the Foothills midday when the temperatures average 90-degrees is dangerous if you do not have adequate water and sun protection.

July is the most popular month to visit Sequoia national park. During this time, visitors flock to the park to tour the famous Sequoia Groves and the General Sherman Tree, the largest in the world.

Snow usually melts around July in the high and low elevated areas. The nights are generally cool while the days are hot.

It rarely rains in the summer.

Fire season usually begins in July. Starting from July 4th, it is common to come across fire bans.

August is also a popular month to visit Sequoia National Park. August and July weather is similar—blazing temperatures in the foothills and warm, dry days in the Sequoias.

August is a high-risk period for wildfires following the dry conditions and scorching temperatures. Fire bans are often found within the park.

In the fall, the temperature typically declines in Sequoia National Park. Dry conditions continue in October, with slight chances of a downpour. Snowfall begins at the end of October and early November in the higher elevation Sequoia groves.

The number of visitors usually drops drastically in early September after Labor Day weekend. Only two thousand visitors explore the Sequoias by November in the initial wintry conditions.

The best time to visit Sequoia National Park is in the fall when there are no crowds. Temperatures in the Foothills are moderate in fall—allowing for excellent hiking.

In September, hot temperatures decline from the summer weather, even though the foothills remain hot. The chances of rain are still limited, and dry conditions prevail. There are fire bans in place due to higher wildfire risk in September.

Crowds decrease drastically after Labor Day, and the weather is perfect for camping in the higher altitudes like at Lodgepole.

September is the final month to explore Crystal Cave, with tours often running through late September. The park roads stay open throughout September.

The peak fall weather in Sequoia National Park is in October. The evenings are cool, and the highs in the Foothills areas become more bearable day by day. Temperatures are chilly at night and crisp during the day in the Sequoia groves.

Fewer crowds visit the park in October, with less than four thousand visitors daily. Snow may start to fall by late October, and the park approaches winter.

In the final week of October, Mineral King Road closes.

October is the ideal period to explore the Sequoia groves for fewer crowds if you’re okay with cold weather. Head to the Foothills if you’re searching for a warm October temperature in Sequoia.

It’s almost winter in the higher altitudes of the park-like Sequoia groves by November. The night temperatures are usually below freezing, and the park averages more than a foot of snow.

Temperatures decline significantly in the Foothills, with chilly nights and mild days. Fall is the perfect time to camp or hike in the foothills.

Cedar Grove in Kings Canyon closes for the season in November.

November’s the ideal period to camp and hike in the Foothills areas. However, if you’re okay with cold weather and a little snowfall, you can still visit the Sequoia groves.

Going to Sequoia National Park During the Winter

Sequoia National Park has cold, snowy winters, especially at higher elevations. Roads usually close in the winter because of snowfall.

Roads to Mineral King and Crystal Cave in Sequoia National Park and Cedar Grove in Kings Canyon National Park stay closed for the season. Additionally, the road between Grant Grove and Lodgepole is unplowed and bound to experience snow closures from January to March.

December is the least visited month in Sequoia National Park. Rainy and snowy days are frequent, and the weather in the higher altitudes is chilly and usually covered in snow.

The park also provides shuttle services in the Giant Forest region of the park for winter guests. January is the busiest winter month, with over two thousand visitors daily.

The road between Grant Grove and Lodgepole Campground in the national forest is unplowed and may close following a snowstorm in January. Additionally, Mineral King, Crystal Cave, and Cedar Grove remain closed.

Final Thoughts: When Should You Visit Sequoia National Park?

June to August is the ideal time to visit Sequoia National Park for most visitors. A larger region of the park has warm weather. Crowds increase during the summer, the park roads remain open, and visitors can access attractions easily through the park shuttle.

Explore Sequoia National Park from early June to late September if you want ideal weather for camping and hiking. Temperatures are usually warm and comfortable in the Sequoia groves.

As for the Foothills area of the park, the weather is excellent between May to early June and from late September to early November.

The perfect time to visit Sequoia National Park to escape crowds is November to April. These months are usually snowy and colder, unfavorable for most visitors.

However, you can visit from late fall to early spring to get the opportunity to participate in cross-country skiing and snowshoeing in the Giant Forest.