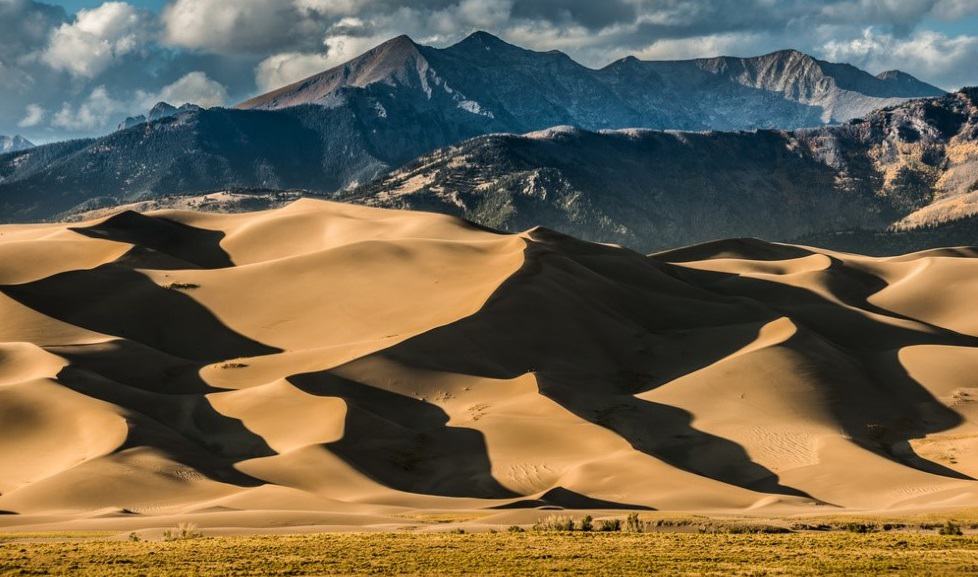 Great Sand Dunes National Park is a U.S. national park in Colorado, with over 300,000 acres of wilderness and dunes for visitors to explore.  Each season is beautiful in North America’s most extensive dunes. The best time to visit depends on what you want to do and your tolerance for extreme heat or cold. Keep reading to learn more about the weather at the Great Sand Dunes, as well as what to do and see during each season.

January is often the coldest month, with average temps in the teens and corresponding lows of 0 to 30° Fahrenheit. Although blizzards and snow are likely, most days will be sunny and quiet—roads with snow often clear fast.

Snow falls onto the sand roughly once a week, although it usually melts away after a few days. Mountain trails are covered in heavy snow, whereas foothills’ pathways are covered in thin snow.

Down Medano Primitive Route, high-clearance 4-wheel cars can typically make it to Castle Creek Picnic Area, but they restrict the rest of the road for the winter after that point.

Throughout this peaceful season, you can observe Elks and pronghorns in the meadows early morning or late evening.

February sees somewhat warmer weather than January, having average highs of between 14 and 39 degrees Fahrenheit.

Most weeks are sunny and calm; however, snow (usually quickly cleaned from the roads) and snowstorms are conceivable. Once a week, snow falls onto the sands, although it usually melts away within a day.

In March, expect erratic weather. Mornings are sunny and quiet, while most of the afternoons are breezy.

When possible, visit the beaches in the morning. Prepare for blizzards and deep snow on rare occasions because March is the snowiest and coldest month of the year.

Temperatures may dip into the low teens during winter weather or reach a serene, bright 60 degrees during late March.

You’ll see elk and pronghorn from the meadows in the morning or late at night, but summer holiday traffic may drive them away from the highways.

Medano Creek is still mostly frozen on the east side of the dunes, but it will trickle further towards the central Dunes Parking place.

April, like March, has erratic weather and is often blustery.

However, the sands aren’t that scorching in the afternoons, and there’s also lots of wind. To avoid the strongest winds, visit the dunes early in the morning.

Although there is a lot of snow on the hiking trails, the lower areas are melting or drying out. Along the Medano Pass Primitive Road, 4WD automobiles may usually make it to the Castle Creek Area.

Further, the route may still be blocked for winter until dry weather allows it to be opened to the highlands. You can spot elk and pronghorn in the meadows early mornings and late at night, but increased traffic may drive them away from the roadways.

The trees haven’t fully leafed out yet. In April, Medano Lake melts and flows further across the dunes, eventually reaching the main Dunes parking area. It might be up to a couple of inches deep by late April.

Pion Campground debuts for the season in early April each year, and as the climate warms up, the campground also fills up on late April Saturdays and Sundays.

The creek’s yearly flow peaks in late May on average. While it’s springtime, and there may be some evening winds, May temperatures are ordinarily mild, with mountain temperatures ranging between 60 and 70 degrees.

At this level, though, snow is still likely in May. Along the creek, the trees and plants have begun to leaf out.

Although there may be a few no-see-ums, mosquitoes are seldom seen in May. The ideal time to see surge flow is in early June and late May, when waves of 50 cm high crash down onto the sand.

Children can slide down the tide with an excellent top runoff on flat inflating toys during wet seasons. The water from the mountains is chilly, but it heats as it distributes across the beach.

Given the stream’s popularity, Saturdays and Sundays in late May and early June are exceptionally busy, with long automobile queues, full Dunes parking area, a populated beach, and many campers. Try visiting on a weekday.

Late May nights bring scorching temperatures to the dunes, exceeding 150 degrees. To dodge burning sand, heavy winds, or thunderstorms with lightning, visit the dunes early in the morning or late in the evening.

By mid-May, the Medano Road is usually open. Most mountain trails have melted to about 9,500 feet by late May, although alpine lakes and pathways are still covered in deep snow.

June brings higher temperatures to Medano Creek, with highs around 76 degrees and lows at around 45 degrees. In late May and early June, the flow is at or near its peak.

Because of the success of the stream, weekends in mid-May and early June are jam-packed, with long waits for automobiles as the Dunes parking area becomes filled quickly. If possible, visit during the holidays, when the crowds are smaller.

Throughout June, the creek’s flow declines—the volume of water usually is relatively small by late June. Mosquitoes will emerge in significant numbers as the stream recedes in early June.

Due to water levels,  malaria season might last anywhere from four to seven weeks. To escape some of the worst insects, go far from the foliage and to the farthest side of the river—mosquitoes hate open beaches and prefer to remain near shady plants and trees.

Other than during storms, the weather in Great Sand Dunes park is usually sunny and tranquil. Sand temperatures can reach 150 degrees, so visit the dune early morning or late evening to prevent being struck by lightning, becoming sunburned, or experiencing heat exhaustion.

Pinon Flats are almost always packed in the summer, mainly in May and June. There are additional campgrounds in the area.

In July, the creek in Great Sand Dune withdraws toward the mountains, and the primary visiting site at the Dunes parking area will dry up. It will flow gently down the eastern border of the dune field on Medano Road (approximately 2 cm deep).

By mid-June to mid-July, there are a lot of mosquitoes because there isn’t much water available for them to breed.

With typical peaks of 80 degrees, July is the warmest month. Except during storms, the weather is usually sunny and tranquil.

August is the park’s second hottest month, with typical high temperatures of around 70 degrees and lows of 40 degrees.

Mountain daisies bloom in the National Preserve, while millions of stiff sunflowers bloom in the dune fields due to the rain. Sunflowers are at their peak for a few weeks in August.

Around this time, Medano Creek’s bed near the central Dunes Parking Area stays mostly dry. In early fall and late summer, the highlands are devoid of snow, though the temperature is often lovely, and the bugs of midsummer have vanished.

September has probably the best climate in the park, with an average temp of 71 degrees to a low of 42 degrees.

Conditions are mostly calm and radiant. In early September evenings, the ridges might get extremely sweltering, with surface temperatures coming to up to 150° F. Aspen trees become gold consistently, starting at the most noteworthy heights. Low groves reach top tone in late September and early October.

As the weather cools, flurries fall onto the mountains, and hiking trail routes like Medano Road provide access to the groves.

On moonlit sky evenings during this time of year, the Milky Way is visible in the sky.

Temperatures drop in October, although there are still some beautiful days, particularly in the early half of the month.

The average high temperature is 60 degrees, with up to 32 degrees as the low. Mostly during storms, the weather is usually sunny and tranquil. Sometimes in the early evening, the sands have cool temperatures. It also snows in late October.

Cottonwood shrubs in the dunes’ vicinity reach their peak deep gold color in mid-October. As climates dip even lower, snow flurries continue to blanket the mountains.

Note that hunting season can also be in effect during this time, so wear bright colors and keep your eyes peeled.

In any region near the dunes, poaching is prohibited. Most hikers in the highlands do not encounter any hunting operations.

November is late-fall at this rise, with expected highs of 46 degrees in the day and lows of up to 20 degrees around evening time. Winter storms are conceivable; however, most days are bright and quiet, with charming evening conditions on the hills.

Pronghorn and Elk appear in the meadows early morning or evening as the recreation area gets calmer. Appearance drops off extensively, yet Thanksgiving weekend is somewhat occupied.

Snowfall is heavier and can last through December, combined with substantially lower temperatures. The average high temperature is 36 degrees Fahrenheit, with lows hovering around 11 degrees; however, sub-zero climates are also conceivable.

On the hills and mountains, it snows roughly once a week.

The recreation area is peaceful at this special time of the year. Assuming new snow has fallen on the rises, snow sledding and cross-country skiing are well known.

Hiking is more straightforward because the sand is more demanding and partly frozen. Evenings on the hills have the hottest temperatures.

Mountainous and hilly trails are often covered in snow, causing gaiters and snowshoes. Courses in the lower slopes may be compacted or covered in thin snow.

You’ll regularly see some wildlife in the early mornings and evenings in the meadows.

The park offers three campgrounds with 124 campsites and all the amenities you would need during your stay, including restrooms, water, waste disposal stations and firewood for sale or self-collection – Campsites must be reserved ahead of time on recreation.gov which can take up to 30 days to do so – Campsite prices range from $10-$25 per night depending on location, size and reservation date.

To be successful, camping at Great Sand Dunes National Park needs to be done with a lot of care and attention. Campers should prepare for the desert’s extremes in temperature before coming out here. It is also important that campers bring food, water and proper clothing when they choose this experience.

When Is the Best Time to Visit Great Sand Dunes National Park?

The best and ideal opportunity to visit Great Sand Dunes National Park depends on your needs and wants.

Do you like to camp? Campgrounds are open from April to October; however, it can freeze at your campsite during this time as well. Summer is best for camping because of the warmer weather and temperatures that often dunk down in the evening.

The most active camp season is July and August, and late May and June bring loads of individuals who wish to swim in the creek.

So, assuming you have adaptability, don’t fret cooler temps, and want to keep away from swarms, the ideal opportunity to visit Great Sand Dunes National Park is pre-summer or late-summer.