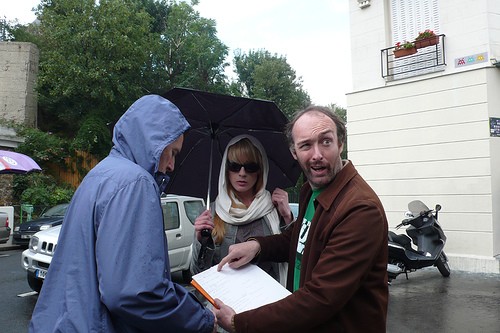 Confusing Gestures – Watching your own body language – the way you say things and how you act can be difficult when traveling in foreign cultures, but that’s nothing compared to trying to understand gestures from other cultures!

Here is a list of confusing gestures around the world that I’ve found rather confusing….

If you ask for a yes or no question, expect to get more confused than before you asked.

You’ll barely ever get a straight answer, just the typical loose shake with the head that says “yes and no” at the same time.

I found this so confusing!

In Greece, I often found that even when they spoke English to you, they always said ‘yes’ and ‘no’ in Greek.

This wouldn’t be much of a problem, if it wasn’t that “ne” actually means yes…

Most countries in Europe have similar words for no: No, Nein, Nej, Nei, etc. so this was definitely confusing.

The Tongue Click was an annoying and confusing gestures that I experienced often while in Bosnia and Croatia.

It’s common in Balkan, Turkey and to some extent Greece, and can be difficult to understand at first.

This short arrogant tongee click simply means no, and is often by westerners seen as a lazy and arrogant gesture.

Another common gesture is the head toss, which often comes together with the Tongue Click.

They toss their heads back and click their tongues, as a way of saying “no” or “no we don’t have it”.

It really looks arrogant and lazy, but I’ve had friends from Croatia, and they acted the same to each other all the time, to them it’s just the way they say no.

Some countries, like Turkey, exaggerate even more by raising their eyebrows.

When asking for directions in Hungary, instead of a straight hand and then pointing to the left, they do it all in one gesture with one finger.

If they mean straight and then turn left, they put out their index finger bent toward the left.

Not very confusing, but I thought it was pretty funny.

For some reason, in Bulgaria, they have done the same thing but opposite.

The head nod up and down means “no”, and the head nod from side to side means “yes”.

This gets pretty bizarre sometimes when the other person can’t speak English very well and explain.

Yesterday, I was – again, approached by a girl asking me something – what she was asking was impossible for me to know, since she was speaking French.

I said that I spoke English, but she didn’t want to understand, and continued speaking French.

When I smiled helplessly and said again that I didn’t understand, she looked at me as though I was a complete idiot, and walked off in a huff.

Maybe she thought I was a psychic, medium, or someone who just granted a free psychic reading, but I just could not make myself be understood by her!

This is the fourth time in four weeks that I’ve met people from European countries traveling through Malaysia without being able to understand or speak one word of English.

This is something which fascinates (and I admit, annoys) me.

I don’t expect them to speak fluent Malay – I can’t do that myself, since it’s not something you learn when you plan to only stay for a few weeks.

But I do expect them to speak a little bit of English.

I have understood that this for some is a touchy subject: Why should we expect other people to speak English just because we do?

However, I can answer to that, perhaps from another perspective.

I’m Swedish – English is not my mother language, and I do not think that people should understand my own language just because I speak it.

For me it’s not even about that, it’s about finding an easy way for two individuals from complete different countries and cultures to communicate and get along.

I have found English to be the most widely spoken language to get by with while traveling, and have been able to make many friends from all parts of the world thanks to being able to speak English.

I understand that they wouldn’t speak to me in English while I was in France or Germany, I would be in their country after all.

But it does confuse me when someone from another country than the one I’m in expects me to speak in their language when we are both in a complete different part of the world.

I am surprised to see so many Europeans traveling the world without understanding one word of another language than their own.

I’m amazed that they dare, and that they seem to get away with it, but I can’t help but feeling a bit annoyed, and wonder how they would react if I started replying to them in Swedish?

Seeing a man standing at the airport screaming and demeaning a young Balinese man in Russian – a few years back – really got on my nerves.

The Russian man was unhappy with something to do with the luggage that he was taking on one of the many great discounted airlines, and was complaining to the Balinese man.

Only that he did all of this in Russian, getting more and more angry with the guy for not understanding.

The Balinese man was trying to explain in English, but without any success.

Of course, people can travel without wanting to understand anyone apart from other travelers from their own country, if they want, but when they expect you to speak their language, and get annoyed when you don’t – it’s really NOT ok.

I would love to know what you think – both native English speakers and those who speak other languages. 10 Cute Carry On Luggage You’ll Want for Your Next Trip

What Country Fits Your Manners?

The world is getting smaller: flights are cheaper and quicker, perpetual travel more accessible to a generation of digital nomads, and the internet and Skype have made the ‘videophone’ dreams that science-fictions dreamed about for years a banal, international reality.

And perhaps what’s most romantic about this tightening of the human fabric is that we’re all from the same place originally.

Fifty thousand years ago, our ancestors began to spread out from Africa and colonize the world, and now – to be deliriously Utopian about it – we’re all reconnecting again on the internet.

As fear-mongering politicians attempt to stir up racial hatred and intolerance in the name of defending their petty domains, it seems like an important opportunity to take a look at how our international cousins have developed in those five hundred centuries that have since passed.

To identify what we have in common and to celebrate our differences…even all of the confusing gestures.

We’ve been discovering, invading, converting and repopulating our way around the world a long time now which makes for some interesting overlaps in culture between geographically disparate places.

Take England and Australia, for example: the latter’s history as a penal colony for the former remains a sensitive issue, but what has proven beautiful about the relationship in the long run is how the new world descendants have developed a way of life that retains aspects of British propriety while evolving its own unmistakable flavor.

In the nearly 250 years since Captain James Cook ‘claimed’ Australia for the Brits, waves of immigration from Europe and Asia have melded with generations-old Australian families and a troubled history of indigenous integration.

So now, although you will see little difference between the amount of personal space desired by Australians and English people, both nationalities greet with a handshake and consider prompt arrival at parties to be the done thing, you will probably be familiar with the idea that English people consider their Australian cousins to be a little too laid back and informal while Australians will accuse the English of being uptight.

It is an affectionate relationship that does not preclude the shared celebration of the nations’ respective music and TV cultures, and of course a shared queen.

Britain has, of course, a colorful and controversial past of colonizing or otherwise exploiting foreign lands, which makes the UK’s recent indication of departure from the European Union all the more ironic.

The Brits colonized Singapore, for example, in the nineteenth century, where its location as a transport hub made it an appealing prospect to tightly-mustached aristocrats with pound signs in their eyes.

Although Singapore has been independent again for over half a century now, English remains the main language for use in business and work.

Interestingly, despite early European influence on American culture through colonization and immigration, shared approaches to tipping in restaurants and hotels have not so much been handed down from the original settlers as picked up by American-born tourists in the nineteenth century.

Following the civil war, wealthy Americans made their way to Europe for vacation and – it has been suggested – brought the custom back with them to impress those back home with their newly cultivated European aristocratic sensibilities.

If many believed the culture of tipping to be inherently undemocratic, automatic tipping remains prevalent in the States today, a trait it shares with other European-tinged New World nations such as Argentina and Colombia.

While tipping rarely happens in Asian countries such as Japan or South Korea, perhaps the continued culture of tipping in Singapore (at least for very good service) is another hand-me-down from 144 years of British rule.

So where do you fit into all of this?

Well, many of these and other national traits are general rules which may be subverted or ignored by individuals and micro-cultures.

While it can be respectful and sometimes safer to be aware of these customs and confusing gestures before travelling it is also important to remain open-minded and historically aware when enjoying the company of far-flung relatives from whom our ancestry may have splintered many decades or centuries ago.

Of course, cultures develop collectively so many such generalizations can be good indications of what to expect.

Which may be useful if you are one such individual who does not conform to the expectations of the land where you were born.

If so, or even if you’re just interested in looking further into our shared, contrasting customs and confusing gestures, you’ll enjoy checking out this new infographic that breaks some of our daily behaviors into national tendencies, so you can see just what countries share with others.

What Country Fits Your Manners