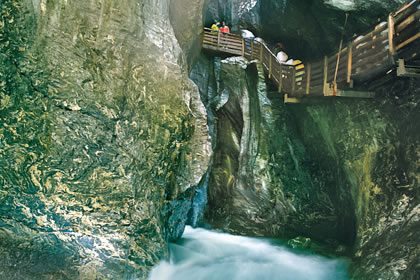 Europe has some amazing natural assets, which explains why in many places one of the most popular things to do is to explore the local nature. In my opinion, the most beautiful walks are those surrounded by water, such as lakes, waterfalls, rivers and gorges. Here are five amazing gorges and canyons in Europe that are well worth exploring.

Best Gorges and Canyons in Europe

Not far from the beautiful lake village Bled in Slovenia, is one of the Slovenia’s most beautiful attractions: the Vintgar Gorge.

The gorge is 1600 meters long and you walk along the river on a wooden trail, passing a series of rapids and stunning waterfalls, the most beautiful one being Šum.

From there you can walk up a small footpath through Hom to the church of St Catherine, an ancient pilgrimage church with a stunning view. Entry to the gorge costs 4 Euro, and the best time to visit is at noon, when the sun reaches down through the gorge.

This was actually the gorge that gave me the inspiration for this post. We visited the gorge just the other day and it was absolutely spectacular. The otherwise green and lush gorge had turned into the most amazing winter wonder, with bizarre ice formations and several meters tall icicles thick as walls.

It looked as though whole waterfalls had frozen in motion, if you’re looking for a beautiful (and open) gorge to visit in winter, this is it.

Entry to the gorge is 3 Euro (2 if you have a visitor card, which you always get when staying in a hotel in Garmisch)

The Verdon Gorge is the largest canyon in Europe, and by many regarded as the most beautiful. Named after its startling turquoise-green color, the Verdon river attracts millions of visitors to explore the 25 kilometer long river Canyon.

The most impressive part of the gorge is between Castellane and Moustiers-Sainte-Marie, where the river has created a 700 meter steep ravine through the limestone rock/mass.

There are many ways to appreciate and explore the gorge, from abseiling from the rocks to the bottom, to take scenic drives around the top, river cruising, rafting or kayaking on the lake or even rock climb on the limestone cliffs.

The Rhine river is one of the longest and most important rivers in Europe, reaching its way through Switzerland, Liechtenstein, Germany, Austria, France and Netherlands. It has played a huge part in European history, something which you can tell by the large number or castles and fortifications that line the river.

The Rhine Gorge (located in the middle Rhine) is the most beautiful section of the river. Along the gorge you see quaint country villages, vineyards on top of hills and more than 40 castles!

Many of the castles are strategically positioned on rock overhangs, as the river often marked the borders between countries and kingdoms. The best way to explore this UNESCO World Heritage site is to take one of the Rhine river cruises which stops along the way at different castles and villages.

Austria has several well known gorges, but this is one of the prettiest, the 4 kilometers long gorge is very narrow and steep, but the walkways are well maintained. Boulders covered in moss, a beautiful waterfall and rainbows wherever the sun reaches the water mist are things you’ll see while walking through the gorge – entry fee: 4 Euro (guest card holders: 3,50 Euro).

Which is your favorite gorge or canyon? Have you been to any of the ones above?

Best Cities to Visit in Europe

9 Best Cities With Beaches In Europe