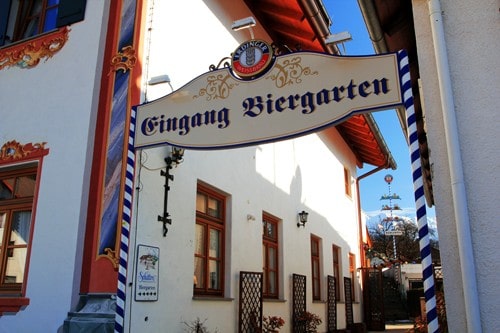 To make sure you don’t have a bad and confusing experience, and that you act with good etiquette when eating out in Germany, follow this guide.

Eating out in Europe is always a slightly different experience depending on which country you visit, and while many things are similar to the US, Canada and the rest of the world, there are some important differences.

When you stop to eat at a restaurant, you will most likely be seating yourself – if you choose a table larger than you need, you may be joined by other diners. This is not bad etiquette in Germany, and often there are a few long tables rather than many small ones, especially in beer gardens.

If this does happen, take the opportunity to meet new people – it could be a lot of fun. Smoking and non-smoking sections exist at some restaurants, but most restaurants don’t have specific “non-smoking” sections and second-hand smoke is somewhat tolerated, so complaining about it won’t help much.

When looking for seating for your group, remember that some tables are reserved for specific regulars – these will likely have a “Stammtisch” sign in plain view – if there are no other tables, ask the waiter/waitress if it would be okay to sit there. 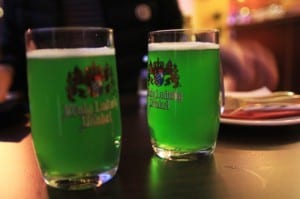 It is not customary to serve bread/rolls before a meal without charge, that is sometimes added to the bill as a separate “cover charge”. Even water carries a charge at most restaurants in Germany.

If you order water you will have to pay for it as any other drink, and you will never get tap water (asking for tap water is sometimes even seen as rude). Germans generally don’t drink tap water even though it’s usually safe to do so.

Service is a bit slower than in the U.S., so you might be tempted to opt for the water and bread and rolls to hold you over until your first course arrives. In many restaurants, even in fast food places like McDonald’s, you will be asked to pay extra for ketchup and mayonnaise.

And, if you are at a familiar fast food venue, don’t expect the same taste or serving size you are accustomed to in the US. 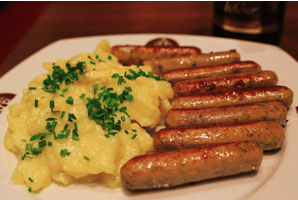 Tipping in Germany is totally different from the United States – first of all, Service and VAT are included in the menu price in restaurants, cafes, bars etc – however, it is customary to tip the waiter.

In Germany waiters and waitresses are normally paid more so the tip tends to be much smaller. A rule of thumb is to add 5 to 10 percent of the bill, and it should be rounded up to the nearest Euro.

You don’t leave the money and the tip on the table when leaving the restaurant, but it expected to pay when the waiter comes up to your table with the check and tells you the price.

When deciding how to tip for services at restaurants and night clubs in Germany, you should also consider how many people were served and how good the service was just as you do in the U.S. 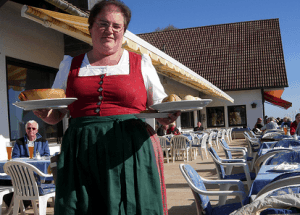 In Germany, cash is king – checks are very rarely accepted and credit cards are not the norm. Germans use either cash or electronic cash cards (EC), so be prepared before visiting a store or restaurant.

If you don’t have cash, ask in advance if another form of payment will be accepted – it sometimes is.

It’s very common to split the bill (especially among younger people), and the waiter usually asks if you prefer to pay together (“Zusammen?” in German).

If you pay separate the waiter will tell you how much you pay each, and you round up your own bill just the same.

German Dining Etiquette Table manners and restaurant etiquette are a little different everywhere you go, but embrace the differences and you will have more fun and make more friends when you venture out to a new world.