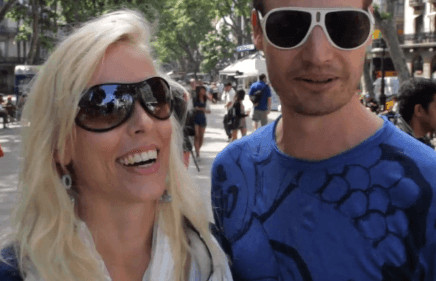 Many people have heard of the world famous La Tomatina festivals in Spain where you throw tomatoes on each other, but few know that it’s far from the only food battle festival in the country.

Spain is simply the king of food wars, with celebrations throughout the year using everything from grapes to flour and even eggs in their food battles. Having spent lots of time traveling Spain, we learned a great deal about their food fights firsthand.

Here are five awesome festivals in Spain when visiting Spain.

La Merengada, also known as the Candy Fight, is a celebration that simply has to be every kid’s dream (as well as those with a sweet tooth like me).

While other countries and cities celebrate Fat Thursday by eating as much cake and sweets as they can before the fasting period begins, the folks in this little town head to the streets to throw their meringue pies on each other instead! When the Meringue pies run out, the fun doesn’t end, but continues in candy throwing instead!

One piece of advice for anyone who is planning to hire a car in Spain during any of these festivals (especially sticky ones like this one): Park the car away from where all the action is so you won’t have to pay for a full cleaning service before handing it back!

When is the La Merengada food fight: February

Battle of the Wine, Haro

The Battle of the Wine festival simply sounds too good to be true: participants throw thousands of liters of red wine on each other using whatever containers they have on hand, from buckets to water pistols.

There is only one goal: to soak everyone you pass with wine!

Everyone dresses in white from head to toe with a traditional red handkerchief around your neck, and the rule is simple: There is no such thing as a “spectator” in this festival – anyone can (and will) be a target!

As you can expect there will soon be a purple ocean of people drenched in wine, all heading down from the hill where it begins to the main square of Haro for a procession around the square.

When is Haro’s Battle of the Wine: June

La Tomatina, Buñol – The most famous food battle in the world, La Tomatina in Buñol, is the mother of all food fighting festivals in Spain.

The tomato throwing festival has become so popular that it has inspired other cities across the world to follow in its path, such as Reno in the US. Every year during the festival the whole town is buried in a red mush of over-ripened tomatoes and people are literally bathing in it.

Approximately 150,000 tomatoes (over 90,000 pounds!) sourced from the four corners of the country are “released” from a fleet of trucks by official instigators and the battle is on!

When is the tomato food fight called La Tomatina in Spain: Always on the last Wednesday of August

Yes, there is even a food fight for throwing eggs and flour! Each year in the town of Ibi in eastern Spain a festival called Els Enfarinats is held, staging a massive battle using eggs, flour and firecrackers!

A group of married men called Els Enfarinats takes control of the village for one day, pronouncing a number of silly and ridiculous laws, fining anyone who infringes them. The other group, La Oposicio, tries to restore order. By the end of the day the money collected from the fines is donated to charity.

Checkout the slideshow with some amazing photos from the festival earlier this year.

When is Spain’s flour fight: End of December

Dating back to the 1930’s, this annual festival signals the end of the grape harvest by having a huge grape throwing battle! Up to 90 tons of locally grown Garnacha Tontorera grapes are dumped on the town square in front of hundreds of waiting participants for the huge grape throwing fight.

Expect to look like one happy purple raising once it’s all over!

When is the grape throwing festival in Spain: end of August

Another grape-throwing festival is the

Which one would you add to your bucket list?